Should Your Breast Implants Be Placed Under or Over the Chest Wall Muscle? 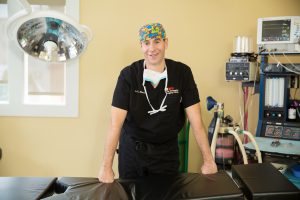 Dr. Robert Shenker takes us through the process of deciding if a patient’s breast implants should be placed under or over the muscle of their chest wall.

Recently, the American Society of Plastic Surgery published the statistics showing the most common and sought-after cosmetic procedures of 2017. As has been the case for many years, the single most common procedure done in North America is breast augmentation, and it’s popular with women in the greater Waterloo and London, Ontario, areas too. It’s favoured because it works, it’s safe, and it makes patients happy!

Despite its popularity, breast augmentation is not without controversies. One lingering question is whether a breast implant should be placed above or beneath the muscles of the chest wall.

Where is a breast implant placed?

First of all, it’s important to point out that a breast implant does not get placed in the breast; it gets placed behind the breast. The whole breast is elevated off of the chest wall, and the implant sits behind or deep to the breast, where it fills the breast skin envelope and projects the whole breast forward.

But what exactly lies deep to the breast, and why does it matter?

Is it better to get breast implants over or under the muscle?

Beneath the breast lies the pectoralis major and minor muscles, and then the ribs. Placing a breast implant under both the breast tissue AND the pectoralis major muscles is a very common way to do the procedure and, in North America, it is safe to say that it remains the standard approach. I have placed hundreds, if not thousands, of implants this way. The rationale for placing the implants under the muscle involves four major factors:

Let’s examine each of those 4 factors.

If a woman desires a very gently sloping upper pole of the breast, without a sharp “take-off” of the implant, the implant can be placed under the pectoralis major muscle. The muscle will compress the upper part of the implant and produce a more gently sloped contour.

The Need To Hide the Implant

Some implants, such as saline devices, are more likely to be palpable and have visible rippling. Hiding those implants under the chest muscles is a necessity!

Some women are very thin and have almost no body fat under their skin. When a woman’s ribs can be easily seen and counted on the upper part of her chest, there is little choice but to employ the chest muscles as camouflage for the breast implants.

Drawbacks to Placement Under the Muscle

Are there disadvantages to placing a breast implant under the chest muscle? There most certainly are! First of all, in order to make space underneath the muscle, several of the strong muscle attachments have to be irreversibly cut. The attachment of the muscle along the ribs and partway along the breastbone have to be cut. This can cause swelling, bleeding, and muscle spasm. It can also decrease the strength and change the direction of pull of the pectoralis major muscle. While this is not usually an issue for most breast augmentation patients, it can be in certain cases.

Why are breast implants placed so high?

Very often after a breast augmentation procedure, patients complain that it took a while for the implants to “settle.” What I believe is happening, in this case, is that a patient sees a swollen, tight, and unnaturally elevated pectoralis major muscle in the upper part of the breast. Patients always interpret this as the implants needing to “settle,” but the implants are not artificially high and have nowhere to settle too! The fullness and swelling in the upper part of the breast is the pectoralis muscle in spasm and swollen from being cut. It takes several weeks and sometimes months for this to resolve. When it does, patients will tell me that their implants have finally “settled.”

What is implant malposition?

One aspect of placing a breast implant under the muscle that often concerns women is something we call implant animation. This refers to the way the pectoralis major muscle compresses, displaces, and alters the shape of a breast implant during muscle contraction. Patients will sometimes notice this while working out or during other types of physical activity, and in some cases, it can really be disturbing. When the muscle relaxes, the implant almost always goes back to its original shape and position. But over time, with repeated muscular contracture, it’s possible to see implant malposition.

Placing implants underneath the breast tissue but on top of the chest wall muscles is an operation I am doing more and more often these days because the need to go under the muscle has been replaced by some newer technologies.

First of all, the occurrence of palpability and rippling with modern-day cohesive silicone gel breast implants is almost unheard of. Using the pectoralis major muscle to add a layer of padding to hide unsightly rippling or to prevent the implant from the palpable just simply isn’t needed anymore with the new and improved silicone implants we use today.

As far as achieving a gently sloping, natural-appearing contour on the upper part of the chest, I no longer need to rely on the muscle to do that. These days, I employ something called fat grafting, which, in combination with the breast implant, I refer to as a composite breast augmentation—part implant, part fat graft. This is by far my favourite way to do breast augmentation surgery in the modern era.

What is a composite breast augmentation?

Composite breast augmentation, also known as breast augmentation with fat transfer, works like this: I dissect the pocket underneath the breast tissue and leave the chest muscles in their original, undisturbed anatomic position, the way mother nature intended them to be.  A moderate or full projecting highly cohesive silicone gel breast implant is then placed in the pocket, which I then close meticulously.

At this point, the upper pole of the breast is still a bit unnatural looking, with a very sharp and abrupt takeoff of the implant. I then do a little bit of liposuction from an area the patient and I agreed upon preoperatively, usually from the abdomen or the thighs. I’ll collect a little bit of fat, process it in a very specific way, and then inject it into the upper pole of the breast to artistically contour the area into a smooth, soft, natural appearance.

In effect, I will do with the fat exactly what I used to do with the muscle that had to be cut and permanently displaced. So, I can get the size, shape, and contour that I want using the composite breast augmentation techniques, and I no longer have to cut the muscle at all. You can see some of our patients’ composite breast augmentation results in their before-and-after photos.

Of course, there are still a few patients in whom I must use the submuscular technique. Those are the patients who are extremely thin, with very little breast tissue and very little body fat. Those patients have a choice between going above the muscle and having an implant that will look somewhat unnatural or have a more traditional approach using a submuscular technique. Ultimately, the patient and I have a thorough conversation about the options, and a decision is made that best suits every individual’s needs.

Women interested in breast augmentation with implants come from Kitchener, Cambridge, and throughout the London, Ontario area to our Waterloo practice. We’re happy to discuss your own breast implant placement options during a consultation. You can request a consultation using our online contact form, or feel free to call us at (519) 746-1132 to schedule an appointment.

We understand living on a budget. Check out our convenient financing options for qualifying patients.

The talented, experienced plastic surgeons at our Kitchener-Waterloo clinic have the advanced training to create exceptional, natural-looking results that meet the individual needs of our patients. The collaborative nature of our practice benefits patients in many ways.

Learn how we’re keeping you safe.